The 7.5th or 8.5th Story BD Wish on an Ema! (Prologue Edition) (in Japanese 絵馬に願ひを！, Ema ni Negai wo!) was released on 13 January 2021. It is distinct from other Sound Horizon releases in that it uses a Blu-ray disc to allow listeners to select stories, which wouldn't be possible on a CD.[3]

* Track numbers are for convenience's sake, and not necessarily indicative of the order a listener will encounter them. For the actual order in which tracks are encountered, see the Route Guide below.

Each viewpoint character's songs in which they wish at the shrine (tracks 1, 3, 8, and 9 above) has a Death Ending version. There is a 0.1% chance of encountering it. The first and third (based on the below listing) are narrated by Akio Otsuka, and the second and fourth are narrated by Rika Fukami. The delivery of the narrations varies in tone. The first two are serious, and the last two gentle and kind. After the ending, the user is returned to the Main Menu without playing the End Credits. 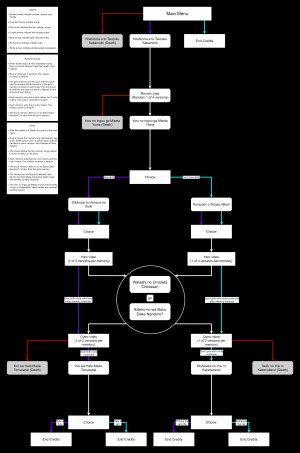 The route guide for Ema ni Negai wo!

This route guide is a high resolution image of the routes that can be chosen in Ema ni Negai wo! (Prologue Edition). On the file page, click "Original file" to see the full image.

The first press factory sealed bonus is a "Connecting fortune ticket ~1 of 2~". It is teased that holding on to this until the full version's release may result in "something nice [happening]".[4]

The following store bonuses come with purchase of the first press edition:[5][6][7]

The 7.5th or 8.5th Story BD Ema ni Negai wo! (Prologue Edition) was announced on September 14th, 2020.[3] It was teased the year before with the launch of the 15th anniversary special site, where if a user clicks the Around 15 Anniversary logo the above quote will appear on screen and a song with the filename “AComingNearestFuture.mp4” will play.[9] With the release of the video teaser, the song's name was revealed to be 星空へと続く坂道Hoshizora e to Tsuzuku SakamichiThe Slope Leading Towards the Starry Sky. 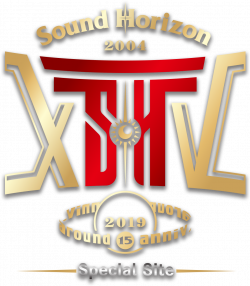 On November 11th, 2020, the list of vocalists was announced in addition to the announcement of Ema's release date as January 13th 2021, and there was a slight alteration to how the title is written (It is still read the same).[5][10][4] On November 20th, the recording vocalists were announced and cover art revealed,[11][12] as well as dancers and vocalists for the concert.[13][14] Two weeks later on December 4th, the release's narrators and details on the first press edition’s bonus goods were announced.[15]

Just over a week before release, on January 5, a preview video for the teaser song 星空へと続く坂道Hoshizora e to Tsuzuku SakamichiThe Hill Road Leading to the Starry Sky was released. The total length of the work, described as "length of the whole shrine visit", was also announced to be over 35 minutes, though the duration of just one path depends on the listener.[1][6] A longer trailer was uploaded on release day.

The synopsis of the story BD is given:[4]

"The stage for the story is a world closely similar to modern day Japan.


One day, a shrine was suddenly discovered in a certain town. Rumors say you may receive a great blessing if you write your wish down on the Ema in the Rouran Shrine. The stories of the people who've made their wishes will begin to unfold.


Will their futures change depending on the choices made...? Make sure to experience it for yourself!"

Listed are the performers for Ema ni Negai wo! (Prologue Edition).

Listed are the vocalists for Ema ni Negai wo! (Prologue Edition).[6][12]

Listed are the narrators for Ema ni Negai wo! (Prologue Edition).[6][15]

Narration for each song and credits.

Listed are the musicians for Ema ni Negai wo! (Prologue Edition)[5][6]

The first part of the Sound Horizon Around 15th Anniversary Festival was the story concert for Ema ni Negai wo! It was performed six times from January through March.[16]